How a Guitar Amplifier Works

We’ve covered a few topics on this site such as how to tune your guitar, how to choose guitar strings, and even how an acoustic guitar works.

Today we’re taking a look at how a guitar amplifier works.  I’ve done some extensive research and have compiled the best information into one article for you to learn how an amp works.  The sources are below the article.

Here’s what we’re going to cover in this article:

Parts of a Guitar Amplifier

Where it all starts: The Guitar Pickups

Parts of a Guitar Amplifier

Let’s talk about a very simple guitar setup.  You have a Fender Stratocaster plugged straight into an amplifier without any distortion, wah, reverb or other pedals. How does the amp work?

The preamps and the speakers come in two separate components:

Instead of having the head and the cabinet in two different boxes, there are combo amps that combine the amp head and speaker in one box.  This provides guitar players with the functionality of regular amps but with convenience and portability.

Before we dive into the specifics of each component, let’s talk about where the signal starts: the guitar pickups.

Where it all starts: The Guitar Pickups

On an acoustic guitar, we learned that energy transfers from the vibrating strings and into the top soundboard.  The soundboard vibrates the air molecules inside the guitar and creates sound waves.  The sound waves bounce off the interior of the guitar and out the soundhole to create the music that you hear and enjoy.  This process is different with an electric guitar.

The preamp is the first stage in a guitar amplifier.  This takes the weak electrical signal from the guitar pickups and shapes it to be used later.  This is done by passing the signal through gain stages.

Before the 1970’s amplifier technology used vacuum tubes for the preamp stage. Vacuum tubes are created similarly to a light bulb.  The tube controls the current in a high vacuum between two electrodes.  As with light bulbs, they need time to heat up before they are ready to use.  These tubes were fragile because of the glass and required maintenance and replacement.  Tube amps are also inefficient as an estimated 50% of the energy used is wasted in heat.

Current technology employs the use of transistors in solid-state amps which are cheaper and more efficient.

The preamp may also contain tone control knobs to shape the sound in the form of treble, middle, bass knobs.

Once the signal is shaped and optimized it passes on to the power amp.

Similar to the preamp, this component of the amplifier employs the use of transits or vacuum tubes.

Once the signal is strong enough, it can be played through a speaker.  The speaker is a transducer; this means that it can transform one form of energy into another form.  In this case, the speaker takes the electrical wave and transforms it into sound.

These are the basic components of the electric guitar amplifier: preamp, power amp, and speaker.  But with time comes more evolutions and innovations with amplifiers.  We’ll go over some of them here:

Amplifiers through the middle of the century saw very few changes.  Jazz guitar players sought the purest tone of the electric guitar and achieved this through the innovation of negative feedback in the 1930s.

The addition of the overdrive and master volume would be a great step forward but it wouldn’t be without its shortcomings.

With higher gain comes compression as a natural byproduct of overdriven sounds.  This compression would cause modulation effects such as reverbs and delay pedals to become unusable.

Amp designers would eventually recognize this and introduce the effect loop before the power amp.  This would enable the use of delay and reverb effects with the high gain amps.  But now what about clean sounds?

The solutions of the 1980s were scarce.  One of them was to have two amps at the same time: one for clean and another for high gain.  Another solution was to reset the one amp between songs to go from high gain to clean.  These solutions weren’t good enough.

The solution was to build two preamps into the amp. One preamp for clean sounds and the other for high gain sounds.  Guitar players can use a footswitch between the two preamps to choose between the clean and gain channels.

We’ve covered the basic parts of the guitar amplifier: the preamp, the power amp, and the speaker.  We’ve learned how each of the parts does their job.  We’ve also covered some of the more important innovations with guitar amps.

Roland: Inside a guitar amp – part 1 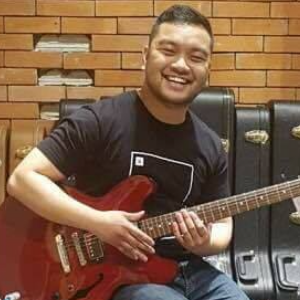